A favorite spiced cookie in the southwest, these keto biscochitos are made with anise, lard and a dusting of cinnamon “sugar”

Growing up in the southwest one of my favorite holiday sweets were these spiced cookies. The dominant flavor comes from the anise seed which has a similar taste to licorice. Moreover the lard base (yup lard!) gives these cookies a rich and buttery flavor while still having a crisp snap once they’ve been baked and cooled. Add a little more spice with cinnamon on top and you’ve got a rich and tasty holiday cookie that stands apart from the pack.

New Mexico declared the bischochito to be its first state cookie back in 1989 as a way to maintain its heritage. Heavily influenced by the indigenous and hispanic people of the area, these cookies are often served during special celebrations such as weddings, baptisms, and holidays… especially Christmas. These cookies are likely not well known outside of the southwest area (they should be) and I would recommend giving them a try to experience their distinct flavor.

These cookies are fairly easy to prepare as you can make the dough in a food processor. They go together quite quickly and bake in under 10 minutes so they’re a great option for a simple sweet treat. The anise seeds can typically be found at your local grocery store. I found them in the bulk section of mine. If you’d like to add a little extra depth in flavor, I’d recommend toasting the seeds in a fry pan to release a bit more flavor and oils, but it is purely optional. Also, if you’re not a fan of seeds in your cookies, you can also grind them up before adding to your mixture… again, optional.

As far as lard goes, it is central to Mexican cooking and essential to giving these cookies their rich flavor. Lard, or manteca, is simply rendered pork fat, and you can find it at most super markets. I used the Armour Brand Lard since its widely available locally in Texas, but you can use any that are convenient to you. You could try substituting the lard with shortening or butter but I think it would change the flavor too much, so I’d recommend sticking with lard (plus fat is good!). 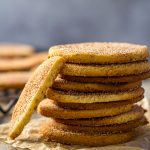 A favorite spiced cookie in the southwest, these keto biscochitos are made with anise, lard and a dusting of cinnamon "sugar"
Course Dessert
Cuisine Mexican
Prep Time 15 minutes
Cook Time 30 minutes