I was curious as to where this dessert derived its name. Is it really French? Why is it called silk? Will my life be hollow if I never learn its origin? Of course, the inter-webs provided its answers so read on for a short history lesson on the French Silk pie.

History of the French Silk Pie

The French silk pie was originally developed in 1951 by Betty Cooper. With this pie, she won the third annual Pillsbury Bake-Off contest for home cooks. Neither Betty Cooper, nor the pie, are French. We have no idea as to why she may have called it French silk, but it can be assumed it’s derived by the silky texture which was a popular fashion trend at the time.

There are other derivations of the chocolate pie. Cream pies are typically stove top cooked fillings that are thickened with eggs or starch (e.g. puddings). Alternatively, chocolate mousse pies are created with egg whites folded into the base to achieve a light and fluffy texture. A true French silk begins with creamed butter and sugar, and ends with raw eggs beaten in until the texture is silky smooth.

By incorporating cream cheese, we’re able to achieve the same silky texture as the original creation…

My version isn’t a true representation of the original pie. However, this keto chocolate French silk pie takes a different approach to make it easier and certainly more keto friendly. By incorporating cream cheese, we’re able to achieve the same silky texture as the original creation, yet still having a great chocolatey flavor. Moreover, adding cocoa powder to the almond crust, we achieve several layers of chocolatey goodness with dark chocolate shavings for good measure.

This pie does need time to firm up though. After it’s prepared, its important to refrigerate it for several hours. I simply make it the day before and leave it in the fridge overnight. When it’s ready to serve, prepare the whipped cream and top it off with chocolate shavings or a dusting of cocoa powder.

An additional tip when making the whipped cream is to stabilize it with gelatin to help it last longer. It’s not necessary, but it will help the whipped cream from melting after a few days. Just take a couple tablespoons of warm water and sprinkle gelatin over the top and let it sit for a couple of minutes. Then whisk it together and pour it into your finished whipped cream with another 15-20 seconds of whisking to combine. 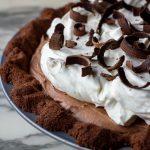 An additional tip for your whipped cream is to add a couple tablespoons of water mixed with gelatin.  This creates a stabilized whipped cream that will make the topping last a few more days.
Previous Post: « Biscochitos
Next Post: Protein Flat Bread »