The holidays are upon us, and with them, holiday desserts! Pies, cookies, holiday candies and of course, cake! Of course, cakes aren’t limited to the holiday season, but a coconut cream cake covered in flakes of toasted coconut remind me of winter, snow and Christmas. So I like to think this would make a great Coconut Christmas Cake.

I decided to make this a three layer cake because its presentation looks great. It would work wonderfully for gatherings or parties. Three layers of almond flour cake is pretty dense so a little goes a long way. I’d also suggest erring on the side of caution when slicing this to keep your carbs under control too. Of course, you can cut the ingredients down and make a smaller version. A single or double layer cake would taste just as great!

The frosting is another area where you can adjust to your palate. After years of being on the keto diet, my taste for sweets have declined. I’m not a fan of super sweet desserts, so I’ve made this frosting a little on the less sweet side. I used 3/4 cups of Swerve confectioner sweetener which is a good balance for me, but you can kick it up to a cup if you like it sweeter. If you find it’s too sweet you can cut it with some more cream cheese to balance the flavor. And if you like your cake extra coconut-y you can add half teaspoon of coconut extract to the frosting. I find the combination of coconut oil, coconut cream and coconut flakes are enough to not be overpowering, but still provide that great flavor. But you do you, boo.

If you find yourself a fan of this keto coconut cream cake, make sure to check out the Coconut Cream Pie I also made, which is a traditional pie made low carb/keto. It’s always a favorite of mine, and I make it a couple times a year. 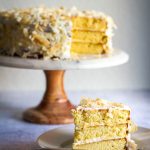 Makes a 3 layer cake which is great for large gatherings. I would cut it down to one or two layers if not entertaining.
Previous Post: « Cilantro Lime Chicken
Next Post: Strawberry Coconut Chia Pudding »