With all the classic flavors of the favored drink, a keto eggnog cream pie is the perfect option for your holiday season.

I know pies aren’t exclusive to the holiday season, but in my opinion, all the fall flavored ones are the tastiest. Pumpkin, pecan, buttermilk, or even savory pies! Plus, they’re synonymous with the season. And what’s more seasonal than eggnog during December? That’s why keto eggnog cream pie is the best of both options!

Eggnog is a rich, chilled, dairy-based beverage traditionally made with milk, cream, sugar and eggs. Making it keto or low carb is relatively easy. You’re simply swapping out the milk with a nut-based option. My version incorporates heavy cream for added thickness, but you can certainly keep it dairy-free by subbing the cream with more nut milk. The eggnog base in this recipe works perfectly fine as a drink on its own. In fact, the amounts I called for below leave a bit of extra for a glass or two. You can even make it in advanced to save some time. Just don’t drink all the nog before you get around to making your pie! If you’d rather just make enough for the pie though, cut the amounts for the base in half.

I’ve also called for generic sweeteners, both granulated and powdered. Often times you’re paying a bit of a premium for powdered versions of the sweeteners. But it’s super easy to make them yourself in a blender. To save a few bucks, I’ll typically buy a monk fruit/erythritol blend in the bulk section of my local Sprouts Farmers Market. I keep this in a big container and pulverize a few cups in my dry blender to make a fast powdered version. Saves space and money!  Beyond just keto sweeteners, I find all sorts of new keto related things when I visit. Often times they’ll label the products as keto friendly on the price label, so be sure to keep an eye out when you visit one of their stores.

Eggnog is one of my favorite holiday flavors. I’ve even incorporated it into a cheesecake if that’s more your fancy. In a pie, in a cake, or even on its own, making a keto eggnog creation is the best way to celebrate the season. Just make sure there’s enough holiday cheer (ahem… rum), to make it a festive one too. 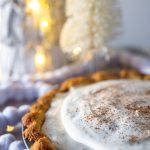