These keto chili cheese dogs are wrapped in Fat Head dough and then slathered with beef chili and melted cheddar cheese. A classic American food, made low carb.

I had made these keto chili cheese dogs after making a batch of beef chili as part of a weekend meal prep. Pigs in a blanket made with Fat Head dough are fairly common. Add some chili and cheese over the top and you get a new take on the classic.

Fat Head dough originated from a 2009 documentary movie of the same name. It’s made with almond flour, mozzarella, cream cheese and egg. There are plenty of variations on the recipe, but the foundations are the same. It comes out with a really good texture which is why it’s so popular and is usually made as a pizza crust. I will say that since it’s mostly cheese, it’s pretty calorie dense. I don’t make it frequently for that reason. It’s really filling though, so one of these keto chili cheese dogs would likely tide you over for a long while.

A trick to making these dogs is to keep the dough fairly then and wrapping the hot dogs with a little space between the dough. When it’s baked the dough will soften and expand. If you use too much dough on a hot dog, it will become heavy and fall off. Also if there is any moisture on the dog, wipe it off with a paper towel. This ensures the dough sticks and won’t slide off. Don’t worry if your hot dogs don’t come out perfectly. You can always use a bit more chili and no one is the wiser. 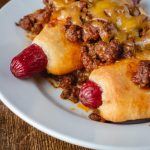