I make these keto pork carnitas fairly often. First, they are easy to prepare, and second, I can make a big batch for leftovers throughout the week. Sprinkle a little cilantro, cheese and some white onions and you have a simple delicious meal. Oh, don’t forget the hot sauce… always hot sauce.⠀

The first thing I get asked anytime I make tacos, is how I make the tortillas. Turns out they are jicama, thinly sliced into tortillas. I do not slice them myself though. I buy them pre-sliced at my local grocer, HEB (an awesome Texas based grocery chain). However, I’ve also seen them pop up at Whole Foods Market as well. So check your store, they are usually found in the produce section. You could try to slice them your self on a large mandolin, but that seems like it’d be pretty difficult. Or, you know, skip the tortillas all together and just eat the meat.

Carnitas are a great meal prep option because you can buy a 4-5 pound pork shoulder (I prefer boneless) and have leftovers throughout the week, or you could freeze them for extended prep. Pork shoulder is relatively inexpensive but is delicious, since it’s slow cooked and extra tender.

What makes carnitas what they are, is frying the shredded meat in its own fat drippings. This makes the pieces nice and crispy which give them a great texture and flavor. They are a canvas for whatever toppings you want, but I always love a little cilantro, white onions, Cotija cheese and a squeeze of lime. My recipe is also not spicy so I’ll end up adding a dash of red pepper flakes or hot sauce on top to give it a kick. 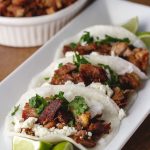