This cheesy French onion soup is prepared using a bone broth base.  It can be served alongside a dripping rib roast or by itself on a chilly winter’s night. If you’re feeling extra ambitious, make some toasted keto bread for a classic onion soup en croûte.

I remember first trying a bowl of French Onion soup on a family vacation to Mexico. I was probably 5 or 6 at the time when I was served a bowl at a local restaurant. I was immediately curious as to what might be hidden underneath that cheesy crust. To my horror, there was a whole pile of onions, which to a five year old is just the worst. But you know what? I ate the whole thing… it was delicious. Every bowl since then can’t compare to that first bowl, but it’s delicious every time.

What makes French Onion soup is the slow caramelization of the onions. Combined with butter it deepens the flavor and brings out the natural sweetness of the vegetable. Then you add a rich and savory beef broth with some fresh herbs to them to you’ve immediately created a base with tons of umami. Finally you cover the entire thing in cheese and it becomes other worldly.

cover the entire thing in cheese and it becomes other worldly.

This soup is probably higher on the carb count (10 net carbs per service) due to all the onions. It makes a delicious meal on its own but could certainly be served in smaller portions along side a roast to cut down on the higher carb count.

I prepared this soup without the traditional bread crostini, again keeping the carbs down, but you could add one to help with preparation. The crostini would help keep the cheese from submerging into the broth and also get bubbly under the broiler. It won’t detract too much from the flavor though if you decide to leave it out. 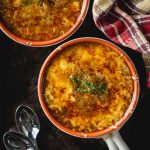 This hearty soup can be served alongside a rib roast or even by itself on a chilly winter’s night (which I did and it was awesome!). If you’re feeling extra ambitious, make some toasted keto bread for a classic onion soup en croûte.
Course Appetizer, Soup
Cuisine French